As you may know, I am a "computer hoarder". However, this doesn't just include stuff made in the last 10-15 years.  In fact, the oldest computer currently in my possession is a TRS-80 Model 100. These computers were released by Radio Shack in 1983, and because they were mostly used by businesspeople and writers, there's no "nostalgia tax" involved and you can get them for relatively little money. I picked up my decent-condition M100 from eBay for around $80. Right now, the cheapest one is going for $85, Buy it Now. Why get a computer this old, though? There are several uses:
1. BASIC machine. The Model 100 has between 8 and 24K of storage for your BASIC programs, and its portability and ability to be used without a TV makes it great for a first BASIC learning machine.
2. Distraction free writing. The keyboards on these old computers feel great, and the screen is JUST small enough that you don't have to worry about what you write. You can then transfer your data to a newer computer with a 25 pin male to 9 pin female null modem cable that you plug into your computer's serial port- information on how to do that here: http://bitchin100.com/wiki/index.php?ti … erterminal This is what I did with my M100 until I decided to make it something I could use more, so I settled on using it as a...
3. Dumb terminal. This computer is one of the most easy to use as a dumb terminal. Following the directions here: http://www.planetnz.com/palmheads/tandy … =dumb#dumb gives you a usable dumb terminal at 2400 baud, except you'll want to use the second termcap file which you can find here: http://bitchin100.com/wiki/index.php?ti … _T_Termcap . I mainly keep it on as an IRC client, although you'll want to turn off listing all users in a channel on joining a channel. Here's a pic of it being used as an IRC terminal with a (Macgyvered) power supply plugged in. The M100 needs a 6-volt power supply with the center pin negative. While my power supply had a positive center pin, I attached a bunch of alligator clips and brass fasteners which were good enough to make a temporary power supply (I have a legitimate one on order, and don't try this at home).
You can get support for these old computers at www.club100.org. I'm subscribed to their mailing list, which sends out an email full of new messages at 6:05 PM Eastern every day. They also sell some new hardware for the device, like AC adapters, carry cases, and devices that plug into the serial port and give you an SD card slot to store stuff on. If you're getting a M100, I'd recommend a Tandy 102, as it's thinner, newer, and runs the same software as the M100. I just got my M100 because it was cheaper on eBay.

I have the first Alphasmart Pro keyboard. The Alphasmart is a portable keyboard with a simple but effective file system that allows you to take notes or compose drafts of whatever you want to write. It is durable, simple, light weight, and operates hundreds of hours on a couple of AA batteries. It has a 4 line 40 character per line display.

It is instant on. I used it in school to take notes. I would dump the notes into my computer via a ps2 keyboard cable. The computer sees it as a keyboard. It does not have any processing power but is great for what it is. Later models actually worked on the Palm software and included wifi.

I picked up the keyboard for $5 and still use it now and then.

You're all collectors too?

I remember the TRS "trash" 80 but never owned one myself (could not afford it).

The AlphaSmart Dana is actually a full Palm OS 4 device but with a 540x160 screen; it comes with a passable word processor and a neat USB keyboard upload mode where you can have it "type" a document back into your main computer, plus a couple of SD card slots to save files.  They're often under $25 on eBay.  The classic Palm Desktop software doesn't work very well on modern systems due to driver rot, but the Linux pilot-tools do fine.

I looked at those other devices before settling on the M100. I ended up picking the mechanical keyboard and alternative uses of the M100 over the expanded storage and easy connectivity of the Alphasmart series. If you only want an electronic typewriter, than pick the Alphasmart series instead.

Palms are cool, but I've always been more of a Newton dude. I still rock my eMate from time to time.

Use it at the cottage as a guestbook. Its cool that folks can scribble/draw and input text.

I had a TSR80 Pocket computer that I used in College to get through economics.  You have to remember that small, fully programmable handheld computers (HP scientific aside and teachers were on to them) were not widely available back then so I coded every formula i would need into the thing via basic and my crude menus and prompts..  well, needless to say I passed with ease...

I still have it along with its cassette interface...  :-)

I had a TSR80 Pocket computer that I used in College to get through economics.  You have to remember that small, fully programmable handheld computers (HP scientific aside and teachers were on to them) were not widely available back then so I coded every formula i would need into the thing via basic and my crude menus and prompts..  well, needless to say I passed with ease...

I still have it along with its cassette interface...  :-)

I also had an Atari Portfolio. Unfortunately it died so I no longer have it. The nice part was that it was a DOS based computer so it was sorta of easy to port programs to it. 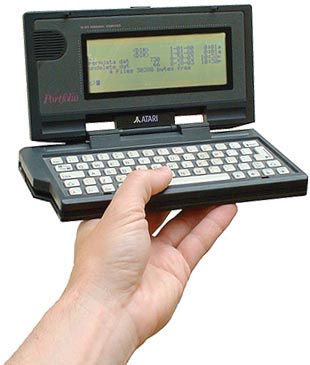 You could add a parallel port, additional memory, and dozens of other add on's.

Trivia from Wikipedia;
The Portfolio appears in the film Terminator 2: Judgment Day, where it is used by the young John Connor to bypass security on an ATM with a ribbon cable connecting the Portfolio's parallel interface to a magstripe card. The Portfolio reappears later in the movie, when John uses it in the Cyberdyne Systems lab to retrieve the key to the vault containing the arm and CPU of the first Terminator.

I remember using a Model 100 to log videotaped raw footage during my internship at a television station in the early 90's.  They had a cable coming from a VTR (Video Tape Recorder) that carried the time code into the TRS-80.  When the scene changed I hit one of the F-keys and the current time stamp was entered.  Then I would briefly describe the scene.  It was brain-numbing work and nobody ever wanted to do it, so when things got slow, I would just log tapes for hours at at time.  I bet they still have a mountain of tapes to log over at that place.