The sixth "birthday" of Chumby is coming up August 25. Wikipedia says it "premiered on August 25, 2006 at Foo Camp and was released to around 100 alpha release testers." Of course, there were versions before, but why quibble. *HAPPY BIRTHDAY CHUMBY!*

I hope we all can at least take some space in the forum to say some nice (or interesting) things about the people and events who brought this to us, and the early alpha testers, and the other folks that were floating around back then. One of the few remaining folks that comes from (before) day 1 was Duane, of course. But just as interesting could be some of our "unboxing" days, especially from WOOT.

And it would be great if people like bunnie could stop by and "sign the guest book" and maybe offer a memory or two. Or maybe Pesident Obama could issue a proclamation. Maybe we could all get invited over to Chumbyland for some cake. I've already run across a couple of tidbits I'll post later. Hopefully, it would be nice to just have "Happy Birthday" posts by great contributors like Develephant, zurk, Ratzfatz, and all. And I've noticed some users from way back like Kathleen pop up on the forums lately. I'd love to hear from more.

I guess we can't come up with online party games, but I'd love to hear some stories. I guess there was always a lot of good office chit-chat. Maybe we can hear some stories now since there's no office or company or Entrepreneur.

So if nothing else, sign this "guest book" and thank all who made this device better than ever for 6 years- I think that's about 120 in computer years. Still free and healthy, and open-source, putting the users first, Happy Birthday Chumby!

(I'm not sure if this was the right place to post this- kind of out of the way. Any suggestions?)

Actually, I'm not sure people know how old the Chumby *really* is - some photos from our archive: 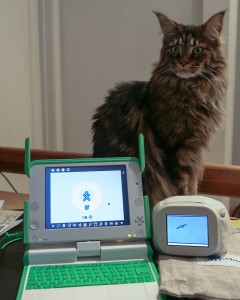 On its screen you can see an image from my Flickr stream, and if you could hear it, it'd be playing Pandora. Those have been the 'killer apps' for the device and it was my bedside alarm clock until recently, when I bought one of the Woot C8s.

I've loved it and hope to get it and the C8 running the new stand-alone firmware before the servers shut down.

No great image to contribute to this thread, but an Infocast 3.5 and an Infocast 8 have served me well since I purchased them at firesale prices just after Christmas; mine too often sits beside my OLPC laptop.

Duane and company have done a fine thing, and as we note the progressive death of flash on mobile devices perhaps Chumby might have been struggling with end-of-life issues at this point even had it not entered into receivership...

Meanwhile I'll enjoy the customized-alarm-clock-weather-forecast-pandora-player as long as I can...

This cake is a lie.

I made a "Happy Birthday" virtual Chumby a couple of days ago. Of course it didn't work while the servers were down! Thanks to Duane & the users for getting us back up online for this milepost.

(Who knew there was a "birthday countdown" widget already!?)

Edit- my apologies- I had the wrong link up for a few minutes.

EDIT August 2013- the above link is broken

My Chumby One has been serving me faithfully for several years.  Pandora is the killer app for me, Shoutcast when Pandora goes down.    Picked up an Insignia 3.5 dirt cheap on closeout, just in case...

Duane is awesome.  Thanks for helping Chumby get to this birthday!

Developers:  thank you for believing and putting your hearts into this product and community.

I hope Chumby gets adopted by a loving parent company soon...

Happy birthday Chumby!  Wish I could leave a longer message but I'm on a mobile till next week. Thanks for the good times!

Just to bump this up, August 25 2013 marks another Chumby Birthday. This is birthday number 7 for our little dears since their "unveiling" at Foo Camp in 2006. And somehow, Duane has outlasted another Microsoft executive. Happy Birthday Chumby, seven years old!