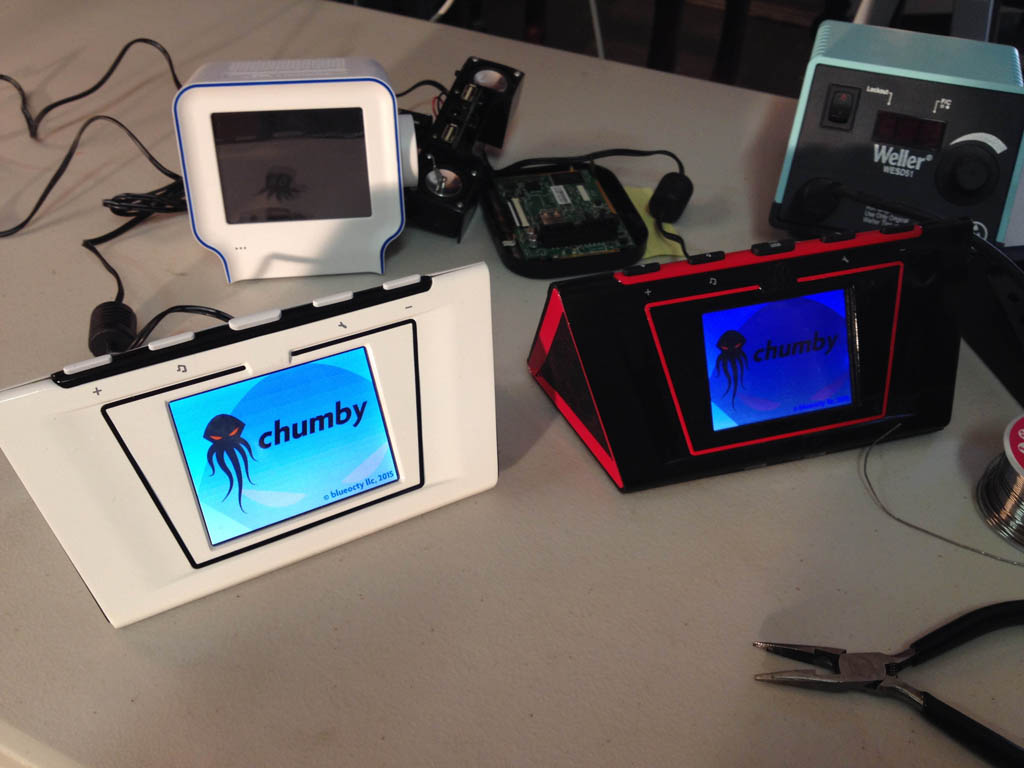 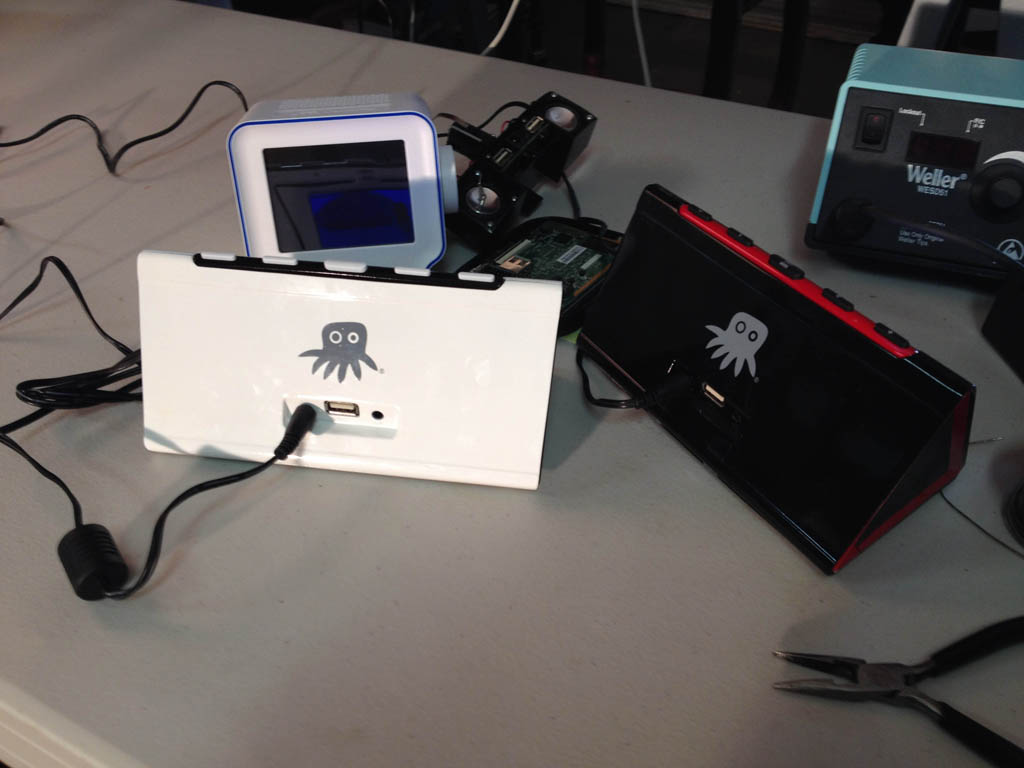 April the 1st, and a Photoshop product?

if it were referring to amputees in general, it'd be prejudice...

in this particular case, though, it looks to be more of a warning

It looks like there are five buttons on top of these prototypes. What were the plans for what the buttons were going to do?

It appears that the outter buttons are for volume up and down.
Center button looks like a main menu button similar to the original top button.
Left center is music sources and right center is settings menu.
Don't know if this means the Blue Octy is meaner but maybe more serious. Cute and cuddly has evolved to elegant and serious. The octy design is 2D so you just may not see the other tentacles (like drawing what seems to be a three legged cow).
Since "smart watches" are becoming more popular (I have not desire to own one) the concept of a smart clock may have a renewed purpose. If Blue Octy can redefine itself and project a "need" this can be a realtity.
I love the design and see a lot of potential. I have always thought the "glorified alarm clock" is a wonderful idea. Internet time, reliable multiple alarms, internet radio and an option to have usable information at your finger tip is a sellable idea.

they have current copyrights on the screen.  Are these going to be in the store soon  (PLEEEEEEZ!)!!??

OK - so what *are* these things?  Was this an April Fools joke?

Well, for one thing, they're real, not renders or Photoshops - nobody's that good at getting all of those reflections and imperfections that perfect.  They are actually functional chumby devices.

These were prototypes for a branded OEM version of Falconwing (i.e. C1, I3) designed to explicitly embrace the whole "clock radio" thing, mainly for hotels, though maybe for retail as well.  The main difference between these and stock Falconwings is the stereo speakers and the multiple buttons, and no volume knob. These devices have greatly improved audio compared to all of the other chumby devices (well, except for one device, a chumby that bunnie hacked into a Tivoli radio cabinet).

I did Photoshop two things - I removed the generic "YOUR LOGO" label that was immediately above the screen - a hotel chain, for instance could have their logo silk-screened on the device at the factory - and some defects where the paint had chipped.  You can still make out the text "YOUR LOGO" on the middle button of the black/red unit.

The two devices are actually high-quality 3D prints, both painted.

Unfortunately, these devices were created toward the end of the Chumby's life, and while there was interest, it was really too late.

The logo you see on the screen was designed by "howdog", one of the former artists at Chumby.  When the Chumby people were hired by Technicolor at the very end, the group became the "fifth domain" within the existing organization.  As part of keeping at least some of our identity, howdog created a variation of the Chumby logo with five arms and attitude.  This was referred to internally as the "evil chumby".

So yes, I posted these pictures as a weird kind of April Fools joke, however it may be that the joke's actually on me - given the feedback I got from Facebook, Twitter, and here, it seems people actually may want a new, updated chumby.

It looks like I will have to give that some serious consideration....

My original reason for getting a Chumby was for a bedroom radio alarm. I immediately hooked it up to some old Walkman speakers (and still have my C1 set up that way)...so I'd get that "C3" in a heartbeat.

I would buy one, or even a 3d printed case, speaker set to turn my c1 chumby into one of these

That is one awesome system.

Note: Custom colors will be considered.
*Not to be mistaken with C3PO

Any new Chumby is a good Chumby.

All it needs is the perfect alarm clock app!  ( http://forum.chumby.com/viewtopic.php?id=9125 )

I'll just start with a red one

and the perfect alarm clock, with nap timer

Okay what's going on with C3? Has everyone gone to sleep on this forum? Let's shake up the world with a new Chumby. Any new things going on?

One requirement that I'd have for this as an alarm clock is that it would have to use an OLED screen rather than a backlit one. My old Samsung Vibrant with AMOLED screen was GREAT as a clock radio in a dark room, but I tried using my (now-retired) HTC Amaze with a backlit LCD and the backlighting REALLY stood out.

When the time comes to replace my current phone it may end up as a wifi-only clock radio meeting the same need, but there's a lot to be said for something that provides the kind of rotating widgets/news updates/streaming with an automatic night mode as well.

OLED touchscreens still seem to be pretty expensive in the quantities we'd be using.

I think I have a solution that could help you out.