Have you ever wanted a device that was like a Chumby, except that it had a real keyboard, could boot off of external media, can fit in your pocket, sounds better than a Chumby (the built in speaker sounds horrible, but the sound chip is the same one that's in the first generation iPod Touch, and it sounds better than my Classic when hooked up to the same pair of speakers), and is easier to hack? If so, you'll love the Zipit Z2. Its specs are actually fairly comparable to the Chumby. It has a 320x240 LCD screen, a ~300 MHz ARM processor (overclockable to about 520 MHz), and 32 megs of ram. It uses MiniSD (NOT MicroSD) cards for storage, although you can run some things off of the 8 MB NAND.

It was originally released in 2007 as a way to keep your kids off of the computer if all they did was chat on AOL Instant Messenger. However, the rise of cheap cell phones kind of killed the Zipit, which meant that hackers picked it up while it was being liquidated. Luckily, its software was built on Linux, so hackers ported more vanilla versions of Linux to it. In around 2010, they ported U-Boot, a standard bootloader for ARM processors, to the Zipit, so it's now extremely easy to get any Linux distros that provide an ARMv5 rootfs working on it. I actually ported Debian Jessie to the Zipit, but even though WiFi and everything work fine, Apt takes so long to do anything that it's not really usable for anything. Arch is really a better option for the Zipit, and it's what I use on mine (due to the huge repositories of software that I don't have to compile for myself), although most people use OpenWrt because it's lighter weight. I actually ported a newer rootfs of Arch (the last one that most people get is a year and a half old at this point), which you can find here. The login is root:root, and there's a 64 MB swapfile there (not on by default, because you're booting off of an SD card). If I set things up right, there should be some zram swap on by default, which is much faster than using an SD card.

If you want to port some distro to the Zipit, you should know that while the mainline kernel does have some support for it, power management and shutdown doesn't work properly. To get around this, Mozzwald (one of the people who has done the most for the Zipit) has a directory of custom kernels made for the device, which you can find here. If you enjoy hardware hacking, you may be interested to know that there's a breakout board for the connector on the back of the Zipit, including micro USB charging and OTG, USB host, and a variety of other ports available here. Your reward for wading through this wall of text is a picture of my Zipit (the screen font is changeable, I just used that small one for the photo). 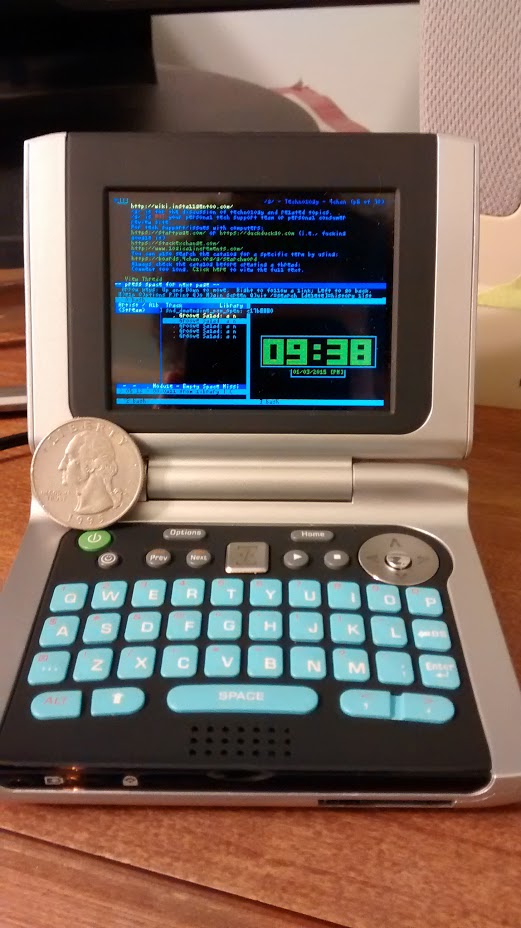 If you want to buy one, as of this post there's a guy with the nick "hinv" on #zipit on freenode with a bunch of the things NOS. He's selling them 1 for $20 plus shipping, 2 for $49 (including shipping anywhere in the lower 48, but without the Zipit packaging), or a case of 8 for $120 plus shipping.

Interesting.  Over the years I've had a Sharp Zaurus SL5500, Progear Tablet, Chumby (obviously) and a few other Linux devices.  I've just paid for 2 of these from Doug.  The keyboard and the generic Linux is interesting (as opposed to the Zaurus).  Could make an interesting "home automation" terminal!

Still cool 5 years later.  Past me would have bought one.